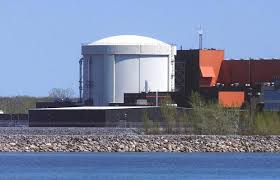 Details are still thin about what happened at Gentilly. The press coverage is all derived from a brief press release on the Canadian Nuclear Safety Commission’s (CNSC) website. Here’s a link to that press release: http://www.nuclearsafety.gc.ca/eng/mycommunity/facilities/becancour/index.cfm

The incident will be discussed at a CNSC meeting today.

Gentilly is located on the St. Lawrence River about 150 miles north of Vermont and New Hampshire.

By day, I work for a call center. In my spare time, I try to save my hometown (and planet) from a nearly constant onslaught of greedheads, lunatics and land developers. I live in a fictional town called Austin, Texas, where I go to way too many meetings.
View all posts by Robert Singleton →
This entry was posted in Canada, Gentilly, Plant shutdowns, Radiation leak, Reactor problems, Worker exposure and tagged Canada, coolant leak, Gentilly, nuclear power, worker exposure. Bookmark the permalink.