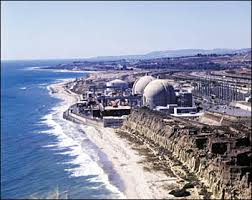 The San Onofre nuclear power plant has been shut down since January after a steam tube ruptured and released radioactive steam. Subsequent investigation has found many more worn tubes and has led the NRC to say that the plant will remain closed indefinitely under the tube problems are repaired.

The fire ignited in an electrical panel in the “non-radiological side” of one of the plant’s two units, said Edison, which operates the plant and co-owns it with Sempra Energy’s (SRE) San Diego utility. The plant’s fire department put out the blaze a few minutes before 1 p.m. local time, less than an hour before it started, the company said.

By day, I work for a call center. In my spare time, I try to save my hometown (and planet) from a nearly constant onslaught of greedheads, lunatics and land developers. I live in a fictional town called Austin, Texas, where I go to way too many meetings.
View all posts by Robert Singleton →
This entry was posted in San Onofre. Bookmark the permalink.