Event Reports: A reactor shuts down in Illinois, reactor coolant system fails a seismic test in Nebraska, and a drunker operator is suspended in Wisconsin 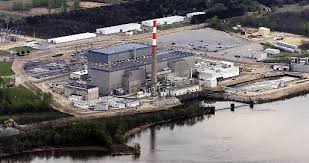 Some items from this morning’s NRC Event Reports:

1. Yesterday afternoon, operators were testing the Unit 2 reactor at the Quad Cities nuclear power plant in Illinois. The unit’s main generator automatic voltage regulator had been upgraded during a just-concluded refueling outage. The reactor had reached 20 per cent power when an automatic reactor scram occurred because of high reactor pressure. According to the Event Report: “Following the reactor scram, reactor water level decreased to approximately zero inches.” Subsequent investigation says the incident was the result of a failure of the new voltage regulator.

2. Yesterday, the Fort Calhoun nuclear power plant in Nebraska reported to the NRC that some of the elements of the reactor’s support system had failed a seismic qualification test. The parts, called snubbers, are designed to “allow thermal motion but restrain seismic motion.” According to the Event Report: “The snubbers were removed from the piping system and tested to determine their performance and if they would have moved to allow thermal growth. Six snubbers failed the test and were either in a locked condition or their movement was dimensionally small relative to the required movement.” Fort Calhoun’s sole reactor has been shut down since last April.

3. And the Kewaunee nuclear power plant in Wisconsin reported that a licensed operator failed a random Fitness of Duty screening yesterday evening. The operator tested positive for alcohol, and the individual’s access to the plant has been suspended.

By day, I work for a call center. In my spare time, I try to save my hometown (and planet) from a nearly constant onslaught of greedheads, lunatics and land developers. I live in a fictional town called Austin, Texas, where I go to way too many meetings.
View all posts by Robert Singleton →
This entry was posted in Drunk at work, Event Reports, Fitness for Duty, Fort Calhoun, Kewaunee, Nuclear Regulatory Commission, Plant shutdowns, Quad Cities, Reactor problems and tagged Event Reports, Fitness for Duty, Fort Calhoun, Illinois, Kewaunee, Nebraska, nuclear power, Nuclear Regulatory Commission, Quad Cities, United States, Wisconsin. Bookmark the permalink.