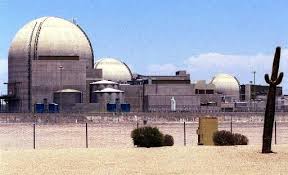 1. Sunday afternoon, operators at the Palo Verde nuclear power plant were performing low power physics testing on Unit 3, preparing to bring the reactor back online following a refueling outage. When inserting a control rod assemby, technicians received an indication that one of the rods “deviated from its subgroup.” According to the Event Report: “The residual positive reactivity in the core caused a corresponding reactor power increase that approached procedural power limits set forth in the low power physics testing procedure. Based on these indications, operators initiated a manual reactor trip.”

2.  Yesterday, I posted a short piece based on news reports about the shutdown Saturday of the Unit 1 reactor at the Vogtle nuclear plant. News coverage did not make it clear whether the shutdown was automatic or manually initiated. The Event Report today said that the reactor “was manually tripped from 100% power due to Main Feedwater Pump ‘B’ discharge flow lowering unexpectedly.”

By day, I work for a call center. In my spare time, I try to save my hometown (and planet) from a nearly constant onslaught of greedheads, lunatics and land developers. I live in a fictional town called Austin, Texas, where I go to way too many meetings.
View all posts by Robert Singleton →
This entry was posted in Event Reports, Nuclear Regulatory Commission, Palo Verde, Plant shutdowns, Reactor problems, Southern Co., Vogtle and tagged Arizona, Georgia, nuclear power, Nuclear Regulatory Commission, Palo Verde, United States, Vogtle. Bookmark the permalink.