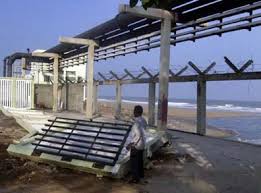 The state-run Nuclear Power Corporation (NPC) would soon shut down the two units each of  220 MW at the Kalpakkam nuclear project.

The step has been taken as a precautionary measure in the wake of a tsunami warning issued by Indonesia after a quake with a preliminary magnitude of 8.9 hit waters off westernmost Aceh province.

The Business Standard had the following details:

NPC chairman and managing director SK Jain told Business Standard: “As the warning came at around 2 pm it will take at least four to six hours to reach tsunami waves to Indian coast. We have been in constant touch with Andaman and Nicobar through hot line. What we have been told is that waves are of 3 to 6 metres high. Therefore, as a precautionary measure, we will soon shut down Kalpakkam nuclear plant. It will take half an hour or an hour to shut down. Also, we will keep in position additional water supply as well as power generators in place.”

Kalpakkam is on India’s east coast about one thousand miles from the epicenter of the earthqake. The plant constructed a new tsunami wall after a 2004 earthquake in the same region.

The Sydney Morning Herald just reported that a fresh tsunami warning has been issued following an 8.2 aftershock.

Here’s a link to the Business Standard piece: http://business-standard.com/india/news/npc-to-shut-down-kalpakkam-nuke-planttsunami-fears/162738/on

And here’s a link to the Sydney Morning Herald: http://news.smh.com.au/breaking-news-world/82-aftershock-sparks-fresh-tsunami-alert-20120411-1wrqc.html

By day, I work for a call center. In my spare time, I try to save my hometown (and planet) from a nearly constant onslaught of greedheads, lunatics and land developers. I live in a fictional town called Austin, Texas, where I go to way too many meetings.
View all posts by Robert Singleton →
This entry was posted in Earthquake, India, Kalpakkam, Plant shutdowns, Tsunami and tagged earthquake, India, Kalpakkam, nuclear power, tsunami. Bookmark the permalink.