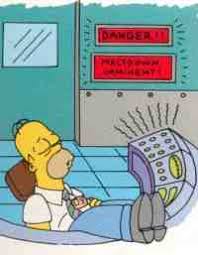 An incident that occurred last June at the Calvert Cliffs nuclear power plant in Maryland has resulted in a violation letter from the Nuclear Regulatory Commission. As the Maryland online site The Bay News reported today:

In a letter dated April 9 and sent to George H. Gellrich of Calvert Cliffs and Constellation Energy Nuclear Group LLC, a commission official reported on an investigation of the incident where a non-licensed operator at the plant is alleged to have “deliberately become inattetive to duty” in one of the facility’s emergency diesel generator (EDG) rooms. Essentially, the NRC concluded the employee had been sleeping on the job.

According to the violation letter:

“Specifically, the non-licensed operator was lying on the floor with his hardhat and radio removed, and his eyes closed. As such, the non-licensed operator was not equipped to have responded to a fire notification, if one had been made, and the control room had not been notified of his inability to respond during the time he was inattentive. Since the actions were deliberate, he violated the NRC’s deliberate misconduct rule that prohibits employees from engaging in deliberate misconduct that would cause a licensee to be in violation of NRC requirements.”

Constellation Energy has thirty days to respond to or contest the findings.

Here’s a link to The Bay News report: http://www.thebaynet.com/news/index.cfm/fa/viewstory/story_ID/27079