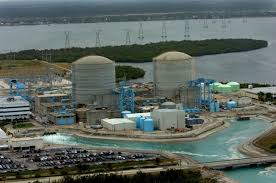 Early Saturday morning, operators at the Saint Lucie nuclear power plant in Florida manually shut down the Unit 1 after the Steam Bypass Control Valve opened unexpectedly, causing the steam temperature to drop. Cause of the valve malfunction is under investigation.

There is a question raised by the Event Report: Where does the steam go when that particular valve opens? Is it vented to containment, or is there an atmospheric release? In a number of steam leak incidents, there have been releases of tritium along with the steam.

By day, I work for a call center. In my spare time, I try to save my hometown (and planet) from a nearly constant onslaught of greedheads, lunatics and land developers. I live in a fictional town called Austin, Texas, where I go to way too many meetings.
View all posts by Robert Singleton →
This entry was posted in Event Reports, Nuclear Regulatory Commission, Plant shutdowns, Radiation leak, Reactor problems, St. Lucie and tagged Florida, nuclear power, Nuclear Regulatory Commission, Saint Lucie, United States. Bookmark the permalink.