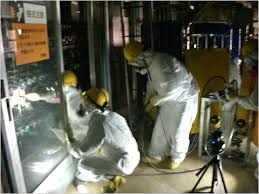 The damage to the core of at least one of the meltdown-stricken reactors at Fukushima could be worse than previously thought, raising new concerns over the plant’s stability and complicating the post-disaster cleanup, a recent internal investigation has shown.

The results of the inquiry, released this week by the operator of the Fukushima Daiichi Nuclear Power Plant, also cast doubt over the Japanese government’s declaration three months ago that the ravaged site is now under control.

According to the Times article:

But earlier this week, an examination at one of the reactors showed the water level at its core to be lower than levels previously estimated, raising fears that the broken-down remnants of the uranium fuel rods there may not be completely submerged and in danger of heating up again.

Cooling water at the plant’s No. 2 reactor came up to just two feet from the bottom of the reactor’s containment vessel, a beaker-shaped structure that encases the fuel rods. That was below the 33-foot level estimated by officials when the government declared the plant stable in December.

The low water levels also raise concerns that radioactive water may be leaking out of the reactor at a higher rate than previously thought, possibly into a part of the reactor known as the suppression chamber, and into a network of pipes and chambers under the plant — or into the ocean.

The TEPCO investigation revealed high levels of radiation in the Unit  2 reactor:

The investigation also found current radiation levels of 72.0 sieverts inside the containment vessel, enough to kill a person in a matter of minutes, as well as for electronic equipment to malfunction.

The new data raises concerns about the stability of the Unit 2 reactor:

Kazuhiko Kudo, a professor of nuclear engineering at Kyushu University in southwestern Japan, said it was now suspect whether the nuclear fuel was being adequately cooled. And if some parts of the fuel remained above water, there was a risk that the fuel could again heat up and melt. That could set off a dangerous spike in the pressure inside the containment vessel, and lead to more radiation escaping the reactor, he said.

TEPCO’s new report also raises questions about the other reactors at Fukushima Daiichi:

Two other badly damaged reactors — Nos. 1 and 3 — could be in even worse condition. Hydrogen explosions blew out the outer walls of those reactors, and officials believe that more nuclear fuel has breached the containment vessel at the No. 1 reactor than the others.

Experts also worry about a fourth reactor that was not operating at the time of the accident, but nevertheless poses a risk because of the large number of spent nuclear fuel rods stored in a water coolant tank there. The No. 4 reactor was also hit by a hydrogen explosion in the early days of the crisis, possibly due to hydrogen that leaked into the reactor from the adjacent No. 3 unit.

The spent fuel rods stored at the No. 4 reactor pose a particular threat, experts say, because they lie unprotected outside the unit’s containment vessel. Tokyo Electric has been racing to fortify the crumpled outer shell of the reactor, and to keep the tank fed with water. But should a problem also arise with cooling the spent fuel, the plant could run the risk of another colossal radiation leak, experts say.

By day, I work for a call center. In my spare time, I try to save my hometown (and planet) from a nearly constant onslaught of greedheads, lunatics and land developers. I live in a fictional town called Austin, Texas, where I go to way too many meetings.
View all posts by Robert Singleton →
This entry was posted in Fukushima, Japan, Meltdown, Plant shutdowns, Radiation leak, Reactor problems, TEPCO and tagged fukushima, Japan, meltdown, nuclear power. Bookmark the permalink.