Event Reports: A reactor trip in New Jersey, bad welds and an earthquake in Virginia and continued Fitness for Duty problem at nuke construction site in Georgia 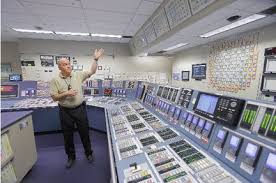 1. On Friday afternoon, the Unit 2 reactor at the Salem nuclear power plant in New Jersey experienced an automatic reactor trip. During the incident, two reactor coolant pumps were unavailable, due to a pair of electrical buses that failed to energize, causing an auxiliary feedwater system activation. The reactor was at 100 per cent output prior to the shutdown. The unit remains at 0 per cent output as of this morning’s Reactor Status Report.

2. Saturday evening, technicians at the North Anna nuclear power plant in Virginia discovered that two steam generator nozzle welds in the Unit 1 reactor had through-wall defects and were leaking coolant. The reactor is currently shut down for refueling.

3. Late Sunday night, the North Anna station declared an emergency for both units due to a 3.1 magnitude earthquake in the area. After an inspection, plant operators decided that no significant damage had taken place. Both reactors at North Anna had been knocked out on August 23, 2011, by a 5.8 magnitude earthquake, resulting in extended outages.

4. The NRC received an update on earlier reported problems with the Fitness for Duty program at the construction site for two new units at the Vogtle nuclear power plant in Georgia. On March 9, contractor Shaw Group Inc. notified Southern Nuclear Operating Company, operator of the plant, that it had discovered that some of its contract employees had not been included in the Fitness for Duty pool, as required by NRC regulations. The update said that significantly more than the 20 individuals previously not in the pool had been discovered, and that the problem now “rises to the level of a programmatic vulnerability.”

2 Responses to Event Reports: A reactor trip in New Jersey, bad welds and an earthquake in Virginia and continued Fitness for Duty problem at nuke construction site in Georgia