Event Reports: A reactor scram at an Ohio nuke, and an improper door installation in Texas creates risk for hydrogen explosion 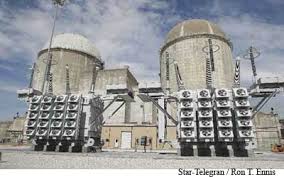 A couple of items from Friday’s NRC Event Reports page:

1. Early Thursday morning, operators at the Perry nuclear power plant in Ohio were forced to scram the facility’s only reactor when three three turbine bypass valves opened unexpectedly during a maintenance operation. The reactor was operating at 100 per cent of rated output at the time of the incident. Cause of the failure is under investigation.

2. Thursday afternoon, owners of the Comanche Peak nuclear power plant in Texas notified the NRC that they had discovered a problem with the doors to the battery rooms that serve both reactors to the plant. The doors are installed with magnetic openers, designed to hold the doors open and provide ventilation to the battery rooms. What technicians found, however, is that the doors were not equiped with a backup power supply that would hold them open during a loss of power incident. The lack of backup power could have an impact on safety during an accident. According to the report: “The closure of the doors to the battery rooms, being an integral part of the exhaust system, would disrupt ventilation in the battery rooms and could allow hydrogen to increase to unacceptable levels during Loss of Offsite Power events.”

In looking at local media to try to supplement what’s known about the Comanche Peak incident, I found a couple of interesting points. First, two weeks ago, NRC inspectors found six minor lapses in safety procedure at the plant, and the facilty self-reported two more. Second, one of the self-reported violations involved radiation exposure to an employee.

The Fort Worth Star-Telegram described the incident:

A technician was exposed to an inconsequential dose of radiation and failed to immediately leave the area despite an alarm indicating more than 120 millirems, the report said.
“The worker received a small dose well below what is allowed per year [5,000 millirems],” Lara Uselding, a spokeswoman in the Arlington office of the commission, said in an e-mail. “The issue is that the worker did not follow procedures when the dose alarm went off and leave the area.”

By day, I work for a call center. In my spare time, I try to save my hometown (and planet) from a nearly constant onslaught of greedheads, lunatics and land developers. I live in a fictional town called Austin, Texas, where I go to way too many meetings.
View all posts by Robert Singleton →
This entry was posted in Comanche Peak, Event Reports, Nuclear Regulatory Commission, Perry, Plant shutdowns and tagged Comanche Peak, Event Reports, nuclear power, Nuclear Regulatory Commission, Ohio, Perry, texas, United States. Bookmark the permalink.