Posted on February 26, 2012 by Robert Singleton 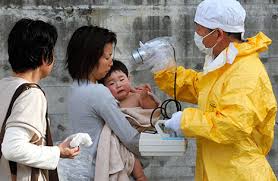 High levels of radiation, including a rate of 470 millisieverts per year at one location, have been detected in municipalities near the Fukushima No. 1 nuclear power plant, according to an interim Environment Ministry report.

A survey conducted from Nov. 7 to Jan. 16 showed that the readings topped 50 millisieverts on an annual basis — a level deemed uninhabitable under a proposed new classification — in many spots north-northwest of the crippled power station.

Some of the hot spots remain extremely dangerous:

“The highest level of 470 millisieverts was logged northwest of the plant at a spot in Futaba, Fukushima Prefecture….”

Meanwhile, the Environment Ministry said that high levels of radioactive cesium have been detected in ash and firewood in eight prefectures in the Tohoku and Kanto regions, with the highest reading — 240,000 becquerels per kilogram — measured in ash from a household in Minamisoma, Fukushima Prefecture.

The survey on ash and firewood from 65 households also found a reading of 163,000 becquerels of cesium in ash from a household in Kawamata, Fukushima Prefecture.

Under current regulations, waste with radiation levels exceeding 100,000 becquerels must be kept at a disposal site and sealed with reinforced concrete to keep out rainwater.

When the study is finalized, the Japanese government plans to revise exclusion zones around Fukushima:

The government will use the data to reclassify the exclusion zone and the zone where people have been on evacuation alert into three categories in April.

The first category will be uninhabitable areas with annual radiation levels of 50 millisieverts or more.

The second will cover areas with levels between 20 and 50 millisieverts where access will be limited.

The third will designate areas with levels below 20 millisieverts where residents will be allowed to return in stages.

By day, I work for a call center. In my spare time, I try to save my hometown (and planet) from a nearly constant onslaught of greedheads, lunatics and land developers. I live in a fictional town called Austin, Texas, where I go to way too many meetings.
View all posts by Robert Singleton →
This entry was posted in Evacuation plans, Fukushima, GE Mark I reactor, Japan, Meltdown, Radiation exposure, Radiation leak, Reactor problems and tagged fukushima, Japan, nuclear power, radiation. Bookmark the permalink.