Posted on February 2, 2012 by Robert Singleton 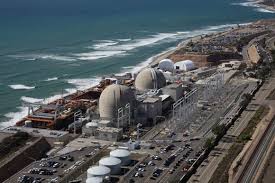 Monday afternoon, operators scrammed the Unit 3 reactor at the San Onofre nuclear power plant after discovering a steam generator leak that exceeded the maximum of 5 gallons per day. Further testing showed that the leakage rate was 82 gallons per day, which led operators to place the unit in a Rapid Power Reductin. About two hours into the event, the reactor entered into an Emergency Operation Instruction due to a steam generator tube rupture.

The La Jolla Light had additional information this morning:

An alarm alerted station personnel to the presence of radioactivity in the (equipment housing building,) and they immediately began shutting down the reactor, NRC spokesman Victor Dricks said.

Dricks acknowledged that some radiation may have escaped to the environment, but downplayed its health risks:

Since the equipment-housing building into which the gas leaked is not airtight, it is possible a “very, very low level” of radioactivity escaped into the environment, according to Dricks, who said those traces would be “barely measurable against (existing) background levels” and would pose no danger to the public.

The plant remains shut for a second day today. This morning’s NRC Reactor Status Report had Unit 3 at zero per cent output this morning.

Here’s a link to the newspaper article: http://www.lajollalight.com/2012/02/02/san-onofre-nuclear-reactor-remains-offline-due-to-equipment-problem/

By day, I work for a call center. In my spare time, I try to save my hometown (and planet) from a nearly constant onslaught of greedheads, lunatics and land developers. I live in a fictional town called Austin, Texas, where I go to way too many meetings.
View all posts by Robert Singleton →
This entry was posted in Coolant leak, Event Reports, Nuclear Regulatory Commission, Plant shutdowns, Radiation leak, Reactor problems, San Onofre, Southern California Edison and tagged California, leak, nuclear power, Nuclear Regulatory Commission, radiation, San Onofre, United States. Bookmark the permalink.