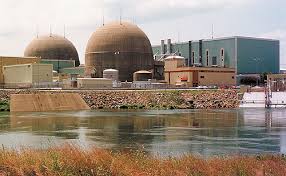 Dominion Power notified the Nuclear Regulatory Commission that it had issued a Notification of Unusual Event (NOUE) at its North Anna nuclear power plant early yesterday evening after experiencing a 3.2 magnitude earthquake at the facility in Virginia. The NOUE was terminated just after midnight following a walkthrough inspection. Both reactors at the plant continued to operate at full capacity during the incident. The tremor is thought to be an aftershock from the 5.8 magnitude quake that shut down both units at the plant on August 23, 2011.

By day, I work for a call center. In my spare time, I try to save my hometown (and planet) from a nearly constant onslaught of greedheads, lunatics and land developers. I live in a fictional town called Austin, Texas, where I go to way too many meetings.
View all posts by Robert Singleton →
This entry was posted in Dominion, Earthquake, Event Reports, Nuclear Regulatory Commission and tagged Dominion, earthquake, North Anna, nuclear power, Nuclear Regulatory Commission, United States, Virginia. Bookmark the permalink.