Posted on January 5, 2012 by Robert Singleton 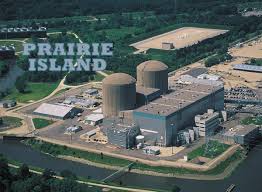 Early this morning, a pipe ruptured in the chlorine house at the Prairie Island nuclear power plant in Minnesota. An as-yet-unspecified amount of sodium hypochlorite spilled and was contained within the building. According to the Event Report: “”The spill resulted in airborne concentrations exceeding Immediately Dangerous to Life and Health (IDLH) conditions in the chlorine house….” Prairie Island declared an Alert and called an offsite HAZMAT team for assistance. There were no reports of worker exposure, and both reactors remained at 100 per cent power output as of this morning’s Reactor Status Report.

By day, I work for a call center. In my spare time, I try to save my hometown (and planet) from a nearly constant onslaught of greedheads, lunatics and land developers. I live in a fictional town called Austin, Texas, where I go to way too many meetings.
View all posts by Robert Singleton →
This entry was posted in Event Reports, Nuclear Regulatory Commission, Prairie Island and tagged event reports, Minnesota, nuclear power, Nuclear Regulatory Commission, Prairie Island, United States. Bookmark the permalink.