Posted on December 28, 2011 by Robert Singleton 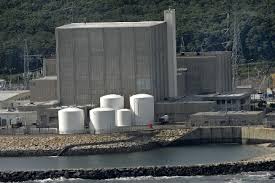 The Pilgrim nuclear plant in Massachusetts had to be closed down today due to a defective steam relief valve. Later news reports said that the incident involved a leak of radioactive steam. As the Boston Globe reported:

The Pilgrim Nuclear Power Station in Plymouth was shut down early yesterday morning because of a leak detected in one of four safety relief valve systems. The steam leak was slightly radioactive and contained inside the plant.

The leak occurred in a small valve that triggers a larger safety valve to open to relieve pressure, according to Rob Williams, a spokesman for Entergy Nuclear, which owns the power station. There are four such safety valve systems that are used in the case of pressure buildup, to vent steam from the reactor to the “suppression pool,” a donut-shaped reservoir of water at the bottom of the reactor building.

This was not the first such incident this year at Pilgrim:

…in mid-November, the station was shut down because of a problem with a different type of valve.

That incident followed a more serious event at Pilgrim:

Last spring, safety issues and an emergency shutdown at Pilgrim occurred. In November, the NRC officially required a yearlong review of safety procedures because of the problems, which occurred as control room operators as were restarting the reactor after it had been refueled.

That review has not yet begun, according to the NRC.

By day, I work for a call center. In my spare time, I try to save my hometown (and planet) from a nearly constant onslaught of greedheads, lunatics and land developers. I live in a fictional town called Austin, Texas, where I go to way too many meetings.
View all posts by Robert Singleton →
This entry was posted in Event Reports, Nuclear Regulatory Commission, Pilgrim, Plant shutdowns, Radiation leak, Reactor problems and tagged Massachusetts, nuclear power, Nuclear Regulatory Commission, Pilgrim, United States. Bookmark the permalink.