Posted on December 17, 2011 by Robert Singleton 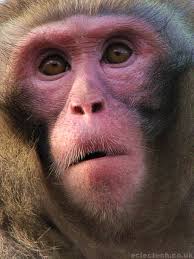 The monkeys will wear the collars for a month and they will be remotely detached, says a team of scientists led by Professor Takayuki Takahashi.

“We decided to use monkeys for this project because the territory they cover is very well known to us,” Professor Takahashi told the Telegraph of London. “It’s the first time such an experiment has been carried out with monkeys.”

The collars will contain a dosimeter, which measures radiation levels, as well as an altimeter to measure height above the ground, and a GPS tracking device, Takahashi said, according to a report in Life’s Little Mysteries.  As soon as February, the collars will be fitted on as many as three wild monkeys living in a forest in the Fukushima Prefecture.

By day, I work for a call center. In my spare time, I try to save my hometown (and planet) from a nearly constant onslaught of greedheads, lunatics and land developers. I live in a fictional town called Austin, Texas, where I go to way too many meetings.
View all posts by Robert Singleton →
This entry was posted in Fukushima, Japan, Radiation leak, Radioactive animals and tagged fukushima, Japan, monkeys, radfiation. Bookmark the permalink.