Posted on December 9, 2011 by Robert Singleton 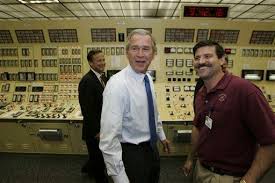 During a fire safety inspection yesterday afternoon at the Calvert Cliff nuclear power plant in Maryland, operators discovered a fire safety barrier problem that could have rendered the Control Room inoperable. Inspectors found a breach in the fire barrier that, in the event of a High Energy Line Break, “could allow steam from a high energy line break in the Unit 2 Steam Generator Blowdown system to potentially impact equipment in the Control Room. The Control Room is not analyzed for a steam environment.” Calvert Cliffs reported such a scenario could “could likely affect the safety related equipment in the Control Room.” Further, the breach is ” is believed to have existed from initial plant construction.” (Unit 2 has been in operation since 1977.) Initial reaction from Calvert Cliffs was to isolate a steam line: “At 1803 on 12/8/11, Unit 2 Steam Generator Blowdown was secured to eliminate the potential for a HELB in the affected area which eliminated the potential unanalyzed condition.”

The problem is confined to the Unit 2 reactor, but both units share a single Control Room, meaning that a break in the steam line in Unit 2 could have affected both units by rendering the Control Room inoperable. In Nuke Speak, this is called a co-location problem. To cut costs, nuclear operators like to group together new units with existing units. Opponents have raised co-location issues  in response to expansion applications of a number of nuclear plants including the South Texas Project.

By day, I work for a call center. In my spare time, I try to save my hometown (and planet) from a nearly constant onslaught of greedheads, lunatics and land developers. I live in a fictional town called Austin, Texas, where I go to way too many meetings.
View all posts by Robert Singleton →
This entry was posted in Calvert Cliffs, Co-location, Event Reports, Expansion, License extension, Nuclear Regulatory Commission, Reactor problems, South Texas Project and tagged Calvert Cliffs, Maryland, nuclear power, Nuclear Regulatory Commission, South Texas Project, United States. Bookmark the permalink.