Posted on November 22, 2011 by Robert Singleton 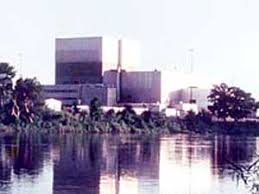 Late Saturday, there was an automatic reactor shutdown at the Monticello nuclear power plant in Minnesota, with an accompanying report of high temperatures in the discharge canal. A supplemental Event Report to the NRC this morning says that the temperature in the canal caused the death of approximately 190 fish. Monticello also notified the state of Minnesota of the fish kill.

By day, I work for a call center. In my spare time, I try to save my hometown (and planet) from a nearly constant onslaught of greedheads, lunatics and land developers. I live in a fictional town called Austin, Texas, where I go to way too many meetings.
View all posts by Robert Singleton →
This entry was posted in Event Reports, GE Mark I reactor, Monticello, Nuclear Regulatory Commission, Plant shutdowns, Reactor problems and tagged event reports, fish kill, Minnesota, Monticello, nuclear power, Nuclear Regulatory Commission, United States. Bookmark the permalink.