Posted on November 18, 2011 by Robert Singleton 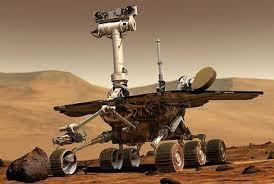 World Nuclear News carried an article today on the NASA Mars Rover Curiosity, scheduled to be launched on next week:

Curiosity’s nuclear battery is the first of a new ‘multi-mission’ design that uses solid state thermocouples to produce electricity from the steady decay heat coming from 4.8 kg (10.6 pounds) of ceramic plutonium-238 oxide. The unit is modular and several could be combined to provide larger amounts of reliable power for future missions. It includes eight individually packed and shielded plutonium heat sources and weighs 48 kg in total.

Plutonium is used in radioisotope thermoelectric generators, commonly known as RTG’s. RTG’s are used to keep spacecraft warm on long trips, so that the instruments won’t freeze.

The amount of plutonium aboard Curiosity is certainly less than the 72 pounds launched with the Cassini-Huygens probe in 2004, but a little plutonium goes a long way. It has been estimated that one pound of plutonium, evenly dispersed, would be enough to cause cancer in most of the world’s population. A malfunctioning spacecraft, for example, could burn up on re-entry and lose its load of plutonium. Which leads us to the Phobos-Grunt project.

Phobos-Grunt is a Russian spacecraft launched on November 8. It was supposed to be on its way to Mars’ moon Phobos, but a malfunction in the guidance system has left the spacecraft parked in Earth orbit. Russian scientists have until Monday, November 21 to fix the problem or miss a window for a Mars mission.

I’ve suspected, but been unable to confirm, that there is some variant of an RTG on board Phobos-Grunt. I was able to find a source saying that the spacecraft has a thermal generator on board, but that’s all I know. I don’t speak Russian, but Phobos-Grunt contains an SOTR, which is short for Sistema Obespecheniya Teplovogo Rezhima. (By the way, I am told that grunt means soil in Russian. Phobos-Grunt was designed to travel to Phobos, scoop up soil and return it to Earth.)

And here’s a link for a website saying that there is a thermal generator on Phobos-Grunt: http://www.russianspaceweb.com/phobos_grunt.html

By day, I work for a call center. In my spare time, I try to save my hometown (and planet) from a nearly constant onslaught of greedheads, lunatics and land developers. I live in a fictional town called Austin, Texas, where I go to way too many meetings.
View all posts by Robert Singleton →
This entry was posted in NASA, Plutonium, spacecraft and tagged Mars Rover, Phobos-Grunt, plutonium, Russia. Bookmark the permalink.

2 Responses to NASA Mars Rover will carry over ten pounds of plutonium into space, raising questions about Russian Mars mission