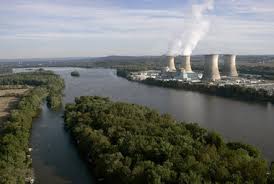 1. Thursday afternoon, the Oconee nuclear power plant in South Carolina reported an accident involving shipment of nuclear materials. If that is a little vague, it’s because the Event Report was less than helpful. Headlined “DAMAGED PACKAGING CONTAINING RADIOACTIVE MATERIAL”, the report said that the “purpose of this report is to notify the NRC of a breach of a package containing a limited quantity of radioactive material.” The report doesn’t say if the package was coming from or going to Oconee, but the fact that the incident was reported by the nuke suggests that it was an incoming package. There was no press coverage on the event. Oconee says: “Although the packaging of the radioactive material was damaged during transportation, the package was transported in an enclosed van. The radioactive material itself has not been released, and the damage did not result in radioactive contamination or any radiation exposure.” Unless the doors of the van were opened….

3. And two Pennsylvania nuclear power plants lost emergency notification sirens during the weekend’s snowstorm. Limerick nuclear reported that 48 of 185 sirens were out of service because of the storm, and Three Mile Island said that 25 of 96 of its sirens were non-functioning.

By day, I work for a call center. In my spare time, I try to save my hometown (and planet) from a nearly constant onslaught of greedheads, lunatics and land developers. I live in a fictional town called Austin, Texas, where I go to way too many meetings.
View all posts by Robert Singleton →
This entry was posted in Event Reports, Fitness for Duty, Nuclear Regulatory Commission, Radiation leak, Security, Transportation and tagged Fitness for Duty, Florida, Limerick, nuclear power, Nuclear Regulatory Commission, Oconee, Pennsylvania, Tennessee, Three Mile Island, United States, Watts Barr. Bookmark the permalink.