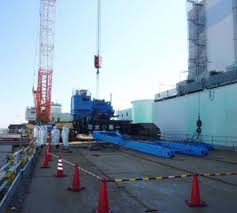 Two men were injured on Saturday at Fukushima Daiichi nuclear power plant in Japan, while assembling a crawler crane.

The men were installing the crane’s back mast using another crawler crane, The support crane was lifting the back mast vertically in order to place it into its pivot points on the superstructure when the slings appear to have slipped or given way, dropping the mast onto the two men.

One of the two was airlifted to hospital for an urgent operation, so far no details of his injuries have been issued. The second man was treated on site and then taken to a hospital in Iwaki City.

For those of you not in the know, Vertikal.net describes itself as “The #1 News and Information Source for the Crane and Lift Industry.”

By day, I work for a call center. In my spare time, I try to save my hometown (and planet) from a nearly constant onslaught of greedheads, lunatics and land developers. I live in a fictional town called Austin, Texas, where I go to way too many meetings.
View all posts by Robert Singleton →
This entry was posted in Fukushima, Japan, Worker injury and tagged accident, crane, fukushima, Japan, nuclear power, worker. Bookmark the permalink.