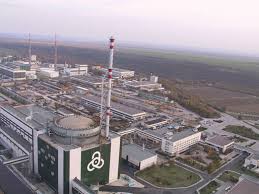 Bulgaria’s Kozloduy nuclear power plant announced Thursday it had switched one of its reactors back on to the electricity grid, after a month of refuelling and repairs, AFP reported.

The 1,000-megawatt reactor number six — one of only two in operation at Kozloduy — was shut down for regular maintenance and refuelling on September 24.

But the plant later said it would have to replace all the protective casings of the reactor’s 61 control rods with more modern protective material, without specifying why.

An inspection a year ago had already found cracks in half of the reactor’s control rod sleeves and they were replaced.

Whether the new replacement was due to more cracks being found or was just precautionary was unclear.

Kozloduy also changed all control rod protective casings in reactor number five after cracks appeared in them during operation in 2006.

The incident was rated level two out of seven on the International Nuclear and Radiological Event Scale (INES).

Kozloduy has four other small reactors but these were closed between 2002 and 2006 as a result of European Union pressure over their safety.

By day, I work for a call center. In my spare time, I try to save my hometown (and planet) from a nearly constant onslaught of greedheads, lunatics and land developers. I live in a fictional town called Austin, Texas, where I go to way too many meetings.
View all posts by Robert Singleton →
This entry was posted in Europe, Plant shutdowns, Reactor problems and tagged Bulgaria, Europe, Kozloduy, nuclear power. Bookmark the permalink.