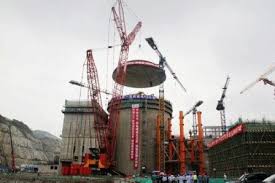 China is facing increasing safety risks from its nuclear power plants as existing facilities age and a large number of new reactors go into operation, the country’s environmental minister said in comments published on Wednesday.

“The safety standards of China’s early-phase nuclear facilities are relatively low, operation times are long, some facilities are obsolete and the safety risks are increasing,” said Zhou Shengxian in a speech published on the website of China’s parliament, the National People’s Congress.

The Chinese official also had criticism for newer nukes:

Zhou told legislators that the scale and pace of nuclear construction had accelerated, a larger range of technologies had been introduced, and potential sources of radiation had become more widespread, making it harder to monitor safety.

By day, I work for a call center. In my spare time, I try to save my hometown (and planet) from a nearly constant onslaught of greedheads, lunatics and land developers. I live in a fictional town called Austin, Texas, where I go to way too many meetings.
View all posts by Robert Singleton →
This entry was posted in China, Reactor problems and tagged China, nuclear powr. Bookmark the permalink.