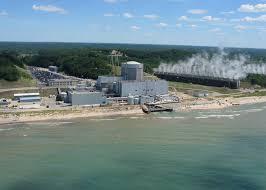 It’s Monday morning, and the Nuclear Regulatory Commission website has a slew of Event Reports from the weekend:

1. As I previously posted, Monticello nuclear in Minnesota developed a problem over the weekend. The reactor shut itself down automatically on Friday afternoon. The Event Report this morning detailed a number of problems with the shutdown. Two of the reactor’s emergency diesel generators (EDG) started on an undervoltage indication. Then, one of the Emergency Feedwater Pumps that serves the EDG’s “failed to generate proper pressure.” The feedwater pump malfunction was traced to an electrical bus failure. The malfunctioning EDG has now been tagged out-of-service. Offsite power has now been restored to the plant.

Monticello has a single General Electric boiling water reactor that came online in 1971. This is the same model as vintage as three of the damaged Fukushima reactors.

2. Louisiana Energy Services’ uranium enrichment facility in Eunice, New Mexico, reported that it is investigating defective welds on the plant’s gas centrifuge, which is currently under construction. The welds are undersized and do not meet NRC specifications. Louisiana Energy says that they will know the extent of the problem by November 23.

3. Perry nuclear in Ohio reported that between 1,000 and 1,500 gallons of fuel oil were spilled onsite Friday. Because of a potential threat to adjacent wetlands, Perry has hired a consultant to determine the consequences of the spill.

4. Susquehanna nuclear in Pennsylvania discovered a major hole in its Fitness for Duty program: the director of the program was not subject to random testing for drugs and alcohol. The director will now be required to submit to periodic testing like other employees.

By day, I work for a call center. In my spare time, I try to save my hometown (and planet) from a nearly constant onslaught of greedheads, lunatics and land developers. I live in a fictional town called Austin, Texas, where I go to way too many meetings.
View all posts by Robert Singleton →
This entry was posted in Event Reports, Fuel enrichment, Nuclear Regulatory Commission, Plant shutdowns, Reactor problems and tagged Eunice, Fitness for Duty, fuel spill, Louisiana Energy Services, Minnesota, Monticello, New Mexico, nuclear power, Nuclear Regulatory Commission, Ohio, Pennsylvania, Perry, reactor shutdown, Susquehanna, United States, welds. Bookmark the permalink.