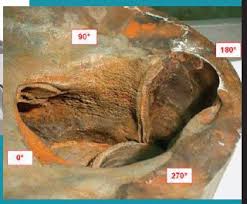 Last week, operators at the Davis-Besse nuclear plant in Ohio were preparing to install a new reactor head at the plant. As part of the repair, a 10 foot hole was cut through the concrete containment building. During the procedure, a crack developed in the containment building adjacent to the hole.

The Toledo Blade described the problem as “a 30-foot hairline crack….”

First Energy is investigating a crack in the concrete containment building of its Davis-Besse nuclear power plant near Toledo, and activists are using the crack as a rallying cry to oppose the plant’s license renewal in 2017, the Associated Press reports.

Davis-Besse has had numerous problems with corrosion on the reactor vessel head. The new head is the third in the history of the plant’s single reactor. One of the corrosion events came close to penetrating the metal on the reaactor head.

By day, I work for a call center. In my spare time, I try to save my hometown (and planet) from a nearly constant onslaught of greedheads, lunatics and land developers. I live in a fictional town called Austin, Texas, where I go to way too many meetings.
View all posts by Robert Singleton →
This entry was posted in Event Reports, Nuclear Regulatory Commission, Plant shutdowns, Reactor problems and tagged containment, corrosion, crack, Davis Besse, nuclear power, Nuclear Regulatory Commission, Ohio, United States. Bookmark the permalink.