Hurricane knocked out some emergency sirens at three nukes 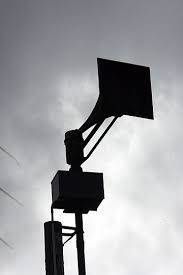 According to this morning’s NRC Event Reports page, three nuclear power plants had problems with their emergency sirens during Hurricane Irene.

Calvert Cliffs in Maryland reported that 44 sirens were out of operation due to loss of power.

Peach Bottom in Pennsylvania reported that more than 25 per cent of its sirens were not working.

And Oyster Creek in New Jersey reported that 10 emergency sirens were not available during the hurricane.

By day, I work for a call center. In my spare time, I try to save my hometown (and planet) from a nearly constant onslaught of greedheads, lunatics and land developers. I live in a fictional town called Austin, Texas, where I go to way too many meetings.
View all posts by Robert Singleton →
This entry was posted in Event Reports, Hurricane, Security and tagged Calvert Cliffs, event reports, Maryland, New Jersey, nuclear power, Oyster Creek, Peach Bottom, Pennsylvania, sirens, United States. Bookmark the permalink.