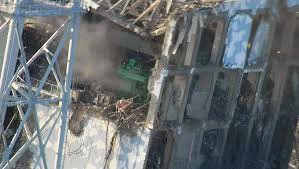 Video from Russia’s RT Network seem to show signs of structural damage to the Unit #4 reactor building at Fukushima.

“…on the web cam you can watch the four reactors. It began to get obvious that building Number Four was leaning to the right….”

Dr. Jacobs says that the Japanese government has confirmed that it is shoring up Reactor Building #4.

Jacobs thinks that the damage is a result of an explosion at the adjacent reactor #3:

“Because of the explosion at Number 3, there is some question about the structural integrity of the building of reactor Building Four.”

He says that collapse of Building #4 could have serious results:

“If that were to collapse, you would have all that fuel from that spent fuel pool just scattered about on the ground. Outside of increasing to a very, very high level of contamination, you would have radiation rise to levels that would make it very problematic for workers to work on this site at all.”

Here’s a link to the News Daily piece, where you can play the interview with Dr. Jacobs: http://hawaiinewsdaily.com/2011/05/fukushima-4-reactor-leaning-high-radiation-beyond-exclusion-zone/

By day, I work for a call center. In my spare time, I try to save my hometown (and planet) from a nearly constant onslaught of greedheads, lunatics and land developers. I live in a fictional town called Austin, Texas, where I go to way too many meetings.
View all posts by Robert Singleton →
This entry was posted in Japan, Radiation leak, Reactor problems and tagged fukushima, Japan, nuclear power. Bookmark the permalink.